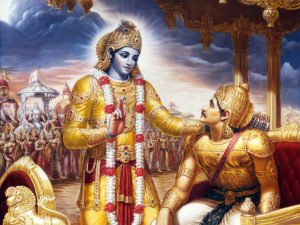 The International Society for Krishna Consciousness (ISKCON), otherwise known as the Hare Krishna movement, includes five hundred major centers, temples and rural communities, nearly one hundred affiliated vegetarian restaurants, thousands of namahattas or local meeting groups, a wide variety of community projects, and millions of congregational members worldwide. Although less than fifty years on the global stage, ISKCON has expanded widely since its founding by His Divine Grace A. C. Bhaktivedanta Swami Prabhupāda in New York City in 1966.

ISKCON belongs to the Gaudiya-Vaishnava sampradāya, a monotheistic tradition within the Vedic or Hindu culture. Philosophically it is based on the Sanskrit texts Bhagavad-gītā and the Bhagavat Purana, or Srimad Bhagavatam. These are the historic texts of the devotional bhakti yoga tradition, which teaches that the ultimate goal for all living beings is to reawaken their love for God, or Lord Krishna, the “all-attractive one”.

God is known across the world by many names including Allah, Jehovah,Yahweh, Rama, etc. ISKCON devotees chant God’s names in the form of the maha-mantra, or the great prayer for deliverance:

Many leading academics have highlighted ISKCON’s authenticity. Diana Eck, Professor of Comparative Religion and Indian Studies at Harvard University, describes the movement as “a tradition that commands a respected place in the religious life of humankind.” In the 1980s Dr.A. L. Basham, one of the world’s authorities on Indian history and culture, wrote of ISKCON that, “It arose out of next to nothing in less than twenty years and has become known all over the West. This, I feel, is a sign of the times and an important fact in the history of the Western world.”

ISKCON’s founder, Srila Prabhupada, has drawn appreciation from scholars and religious leaders alike for his remarkable achievement in presenting India’s Vaishnava spiritual culture in a relevant manner to contemporary Western and worldwide audiences.

Members of ISKCON practice bhakti-yoga in their homes and also worship in temples. They also promote bhakti-yoga, or Krishna Consciousness, through festivals, the performing arts, yoga seminars, public chanting, and the distribution of the society’s literatures. ISKCON members have also opened hospitals, schools, colleges, eco-villages,free food distribution projects, and other institutions as a practical application of the path of devotional yoga.

Members of the Hare Krishna Movement follow ancient India’s Vedic Literature, primarily Bhagavad-Gita and Srimad-Bha gavatam. These teachings date back over 5000 years and are practiced by more than 900 million people today. The Bhagavad-Gita also forms the basis of the world’s third largest religion, Hinduism.

What is the Hare Krishna chant?

A mantra is a spiritual sound vibration that purifies the consciousness and awakens love of God. The chanting of Hare Krishna mantra- Hare Krishna, Hare Krishna, Krishna, Krishna Hare Hare / Hare Rama, Hare Rama, Rama Rama, Hare Hare- is recommended in the Vedic literature as the easiest method for this age to attain spiritual realization. Krishna is the Sanskrit name of God meaning “all Attractive”, and Rama is another name for God meaning “reservoir of all pleasure”. Hare refers to divine energy of the Lord. So the Hare Krishna mantra means, “O all-attractive, all-pleasing Lord, O energy of the Lord, Please engage me in your service”. There are two ways to chant this mantra: group chanting (kirtana) and individual chanting as on beads (japa). No strict rules apply for either method, and anyone can chant at any time.

Why do some members wear robes and saris?

In the ancient Vedic culture a person dressed according to his or her social and spiritual position. Following those traditions, women who live in Hare Krishna communities wear saris and men wear robes called dhotis. Married men wear white and unmarried men wear saffron. Men living a monastic lifestyle shave their heads and leave a tuft of hair in the back, called a sikha. This is done as a sign of renunciation and surrender to Krishna, as well as for cleanliness and simplicity. The sikha is also a sign of accepting the premise that God is a person and not merely an impersonal force. The clay marking on the forehead signifies that the body is a temple of God. The clay comes from sacred rivers in India.

Do you believe in reincarnation?

Yes. The Bhagavad-Gita, the principal scripture of the Hare Krishna movement, and the roots of understanding reincarnation, states “As the embodied soul continually passes, in this body, from boyhood to youth to old age, the soul similarly passes into another body at death. The self-realized soul is not bewildered by such a change.” The Vedas further explain that the soul in the material world transmigrates within a cycle of material birth and death through 8,400,000 forms of life. The human form, however, is the only birth which affords one the chance for spiritual realization. Species lower than humans are not endowed with sufficient intelligence to understand the soul as different from the body.

According to Krishna conscious philosophy, what is the goal of life?

The Vedas state that the goal of life is to learn how to properly serve God, revive one’s love for God, and return to live eternally with Him in the spiritual world at the end of life. The chanting of the mahamantra fully awakens the awareness of our true eternal spiritual identity, which is beyond the temporary body and the limitations of this existence within the material realm. This Self-realization purifies our consciousness and frees us from the cycle of repeated birth and death, or reincarnation.

Who started the Hare Krishna Movement?

In 1965, His Divine Grace A.C. Bhaktivedanta Swami Prabhupada travelled alone from India to America to establish the timeless tradition of Krishna consciousness in the Western world. He single-handedly began the International Society for Krishna Consciousness (ISKCON), a worldwide society of over 500 temples, farm communities and schools, with a membership of over three million members in the West, fifty million worldwide. Srila Prabhupada translated over 50 books on Krishna consciousness, now available in over 65 languages. Before he passed away in 1977, he arranged for the movement to be guided by a Governing Body Commission composed of his senior disciples. Also, after Srila Pabhupada’s departure, his disciples themselves began to accept disciples, carrying on the age-old system of disciplic succession. Thus, he touched enough people who can pass along this knowledge to others that this movement will continue well into future.

Why are you Vegetarians?

The Vedic scriptures establish nonviolence, called ahimsa, as the ethical foundation of vegetarianism and for peaceful society. According to the Vedas, God is the Supreme Father of all creatures. Not just humans. Therefore, slaughter of innocent animals is considered equivalent to killing one’s brother or sister. Krishna devotees follow a wholesome lacto-vegetarians diet excluding meat, fish and eggs. Although it may be argued that vegetarians are guilty of killing vegetables such as fruits, nuts, milk, and grains do not require killing. Also plants have an undeveloped consciousness as compared to animals. Therefore, when a plant’s life is taken, the pain involved is dramatically less than that of a highly-sensitive animal such as a cow or lamb. Further, in Bhagavad-Gita (9.26), the Lord says, “If one offers Me with love and devotion a leaf, a flower, a fruit or water. I will accept it.” Here he clearly specifies what He will accept. According to karma, nature’s law of action and reaction, human beings must suffer for any killing that’s against God’s laws. For this reason, as well as to show recognition and appreciation for the supreme proprietor and supplier of all food, devotees prepare vegetarian meals as devotional offerings to Krishna, God. Then food is called prasadam (spiritual food), which can be fully enjoyed without karmic reaction.

How can I participate?

Many people wonder if they have to shave their heads and wear robes, or live in the temple to join or participate in the Hare Krishna Movement or Vedic philosophy. But that is not necessarily the case. A person can easily participate or become involved in whatever level they feel most comfortable. You do not have to give up your job or career or your family. If you look around, you will see many members of Hare Krishna community who are in full agreement with the Vedic goal of life, but still have their families, careers or pursue further academic studies or skills. They simply add the Vedic lifestyle, the study of the Vedic philosophy, and the joyful chanting of Hare Krishna to what they already have. So it is very easy to begin participating in the Hare Krishna practices to whatever degree is most suitable for you.