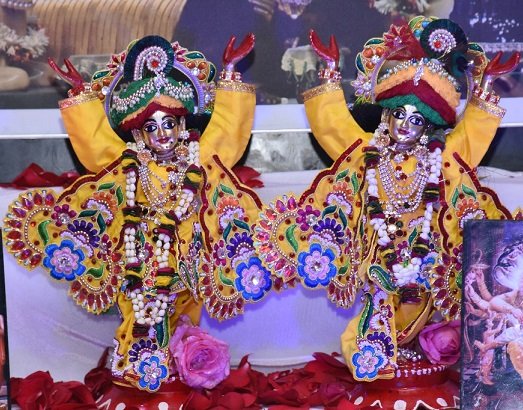 Lord Gauranga, the golden incarnation of Lord Krishna, appeared on this planet around 500 years ago, to reclaim his children who turned their back towards him. The Lord, in his previous incarnations like Krishna, Rama and Narasimha annihilated the miscreants who caused suffering to his devotees. But Lord Gauranga, who was later known as Lord Chaitanya Mahaprabhu after accepting the renounced order of life (Sannyasa), transformed the hearts of the wicked instead of annihilating them. This is the munificient nature of Lord Chaitanya. He was born in Navadwip dham in Nadia district in the state of West Bengal, and during his early pastimes, He along with his eternal associates Lord Nityananda, Advaita, Gadadhar, Srivasa and others, spread the Yuga dharma – the congregational chanting of the holy names of the Lord.

Gaura Purnima is one of the most auspicious festivals of the Gaudiya Vaishnava sampradaya. In ISKCON Aurangabad, the Deities manifest in new beautiful outfits in gorgeous breathtaking attractive garments in the Shringara darshan. Devotional fevor permeates all over in the form of melodious kirtans which touch the heart, ecstatic dancing, and enlightening discourses on the teachings of Lord Chaitanya. At dusk, an abhishek ceremony is performed for the utsava murtis of Nitai-Gauranga. A Maha-arati is offered to their Lordships after the abhishek, and the day’s celebrations end with the distribution of sumptuous prasadam.