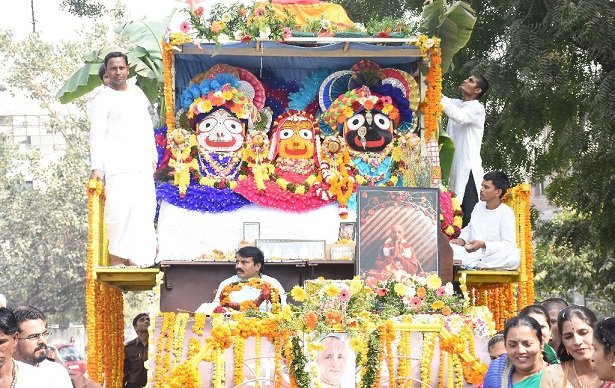 With the exception of Kumbha Mela, the Rath Yatra traditionally held in Puri, India attracts the largest gathering of pilgrims in India. During this festival, the beautifully bedecked Deities of Jagannath (Lord of the universe), Baladev (Krishna’s brother) and Subhadra (Krishna’s sister) are taken out on three giant chariots specially constructed for the parade.

According to scriptures, even though Krishna became a great King of Dwarka, his childhood was spent amongst simple cowherd boys and girls in the village of Vrindavana. This mood of wanting to bring back Krishna to the playful pastimes of Vrindavana signifies the inner meaning of Rath Yatra. When devotees pull the ropes of the cart, it symbolizes the pulling of the Lord into our hearts.

In the late 1960s, A.C. Bhaktivedanta Swami Prabhupada inaugurated this joyous event in North America. With roots steeped in spiritual traditions, the festival is now celebrated in every major city around the world, including London, Paris, Durban, Sydney, Mumbai and New York. For instance, in Aurangabad, more than 2,000 people take part in the colorful walk, pulling the tall chariot. Exhibitions and stage performances often accompany the parade, amidst melodious singing, chanting, drumming, dancing and feasting.